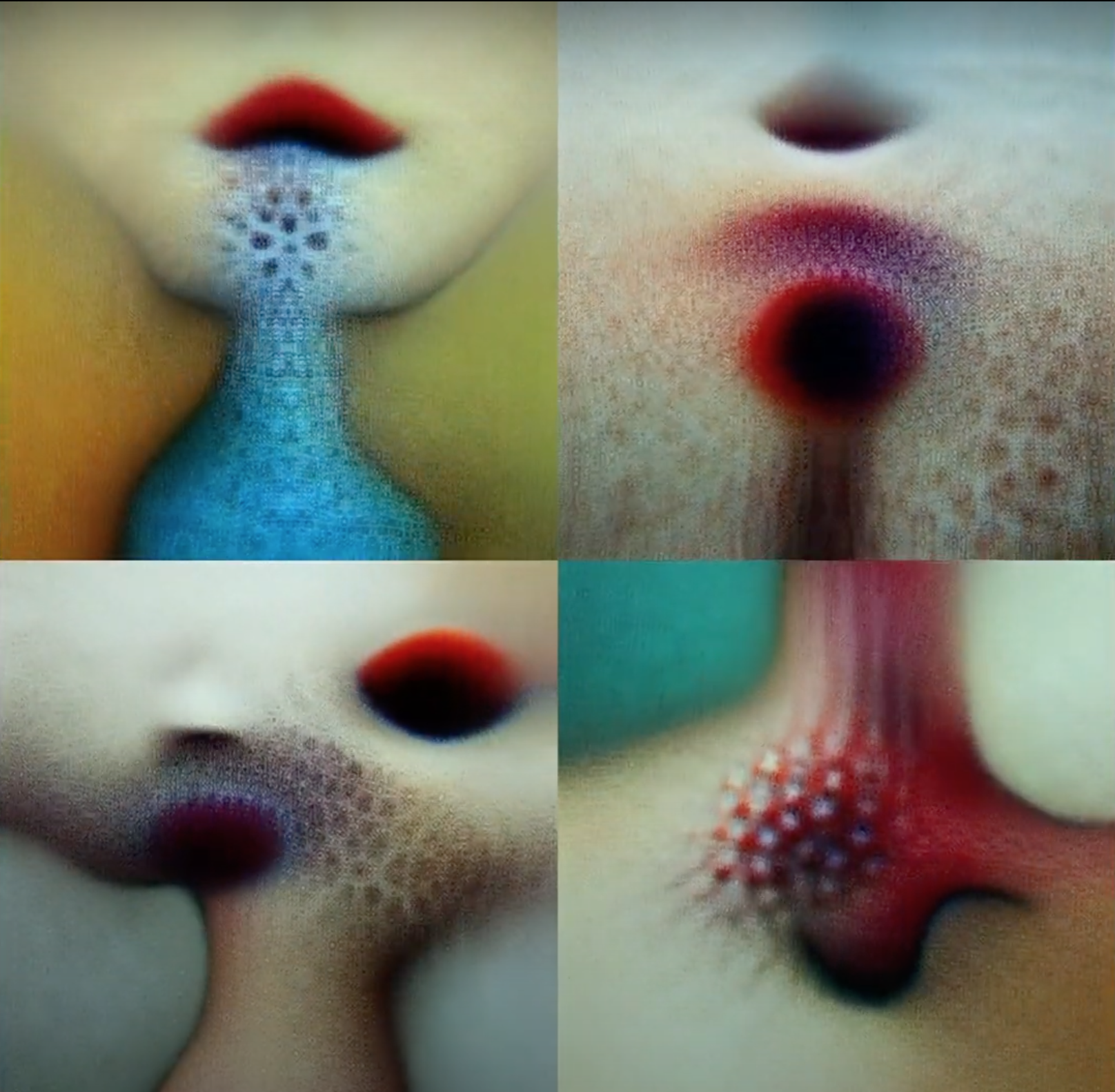 Parallax is a journey into digital alchemy, to a space where data becomes music and text becomes images of artistic abstraction used as a point of departure for something else to emerge from a primordial soup of possibilities. This new creation seems to be made from an energy that contains emotional and mental matter as it shape-shifts and contorts itself in artificial imagination.

“The starting point is that reality provides the data, to be understood as constraining affordances, and we transform them into information, like semantic engines. Such transformation or repurposing is not equivalent to portraying, or picturing, or photographing, or photocopying anything. It is more like cooking: the dish does not represent the ingredients, it uses them to make something else out of them, yet the reality of the dish and its properties hugely depend on the reality and the properties of the ingredients. Models are not representations understood as pictures, but interpretations understood as data elaborations, of systems.”

Luciano Floridi, The Logic of Information: A Theory of Philosophy as Conceptual Design
link to source

To create the work, Producer Hugh McGrory brought together two sound and visual artists who had both contributed technically and creatively to TwoTone, the data sonification software tool used in the piece. For the music, Cristian Vogel used a data set from the environmental scientist Anders Pape Møller who captured the history of a declining population of local insects in Denmark by counting and recording the number of them killed on his windscreen as he drove the same route for 20 summers. Vogel mapped the data to sound with TwoTone and sent the sequencing information to a Sequential Circuits Prophet X synthesizer. The fluctuating patterns in the data create the music and the recording has not been edited in any way.

“What often comes through more when sonifying a data set, is what I call the feeltone or the mood of the data. The set and setting of data often contributes an emergent, perceptible characteristic in larger scale musical forms derived from that data.”

For the visual elements, Glenn Marshall used text prompting techniques to generate 5,000 individual images of abstract art with AI, creating a data set used to train a general adversarial network (GAN) model to generate random new ‘fake’ images that look like the dataset but are original creations. Marshall then used StyleGAN3 to move through ‘latent space’ exploring all these creations.

“Rather than just using algorithms and random numbers to create images, the computer can now use a trained neural model of human memory and how it stores shapes, textures, forms and colours, so that it can present memories of people, places, dreams and visions of the imagination as it would to the human mind.”

Cristian Vogel is a music producer, technologist and sonic innovator. A fully independent career in music and audio technology has won prizes and awards establishing him as an outstanding influence in the fields of composition and sonic design. Currently based in Copenhagen, he continues developing music, sound and audio technology at his studios Ekometic and NeverEngineLabs.

Glenn Marshall is a computer artist and animator. In 2008 he won the prestigious Prix Ars Electronica for a music video he created for Peter Gabriel. His work is inspired by science and nature, the meditative and the abstract, fusing the human generated and the computer generated through mathematics, physics, programming and code art. He creates and shares AI art daily, both casual and personal NFT works.

Hugh McGrory innovates at the intersection of emerging media and technology. As co-founder at Sonify, he leads creative development for TwoTone, the free web-based open source tool for data sonification that allows users to sonify a dataset without writing a single line of code, built with support from Google News Initiative. Hugh has curated audiovisual interactive installations during Art Basel and Volta Art Fair in New York, Miami and Switzerland.

TwoTone is a free and open source web app to turn data into music. TwoTone is a Sonify project built with support from Google News Initiative that provides an introduction to data sonification and data-driven music.

StyleGAN3, also known as Alias-Free GAN is the latest version of StyleGAN, a revolutionary computer vision tool first released by researchers from NVIDIA in 2018. It has changed the image generation and style transfer fields forever.